Isabel and Julia first met on Skype on a cold January morning in 2017. At this point, there was only a bad Skype connection and the vague idea of doing a staff swap between Impact Hub Zurich and Impact Hub Islington (London) at some point later in the year.

Fast forward nine months, during which many more Skype meetings took place and funding from Stiftung Mercator Schweiz was secured, they met in London to start the 2-months exchange. It didn’t just involve swapping organisations and teams – they went all in: flats, bicycles, neighbours, hobbies and pets. The exchange was sparked by an appetite to learn from another Impact Hub and concluded with plenty of insights, memories, chocolate/tea and renewed energy gained. Here they share their main take-aways. 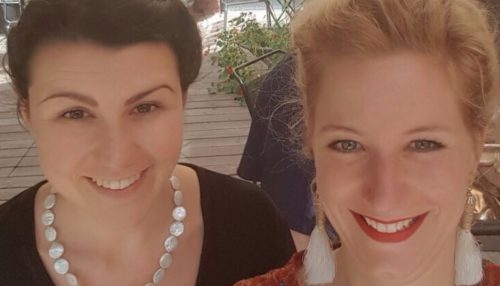 Julia and Isa met before they swapped their lives for two months.

Julia: London to Zurich and back

Impact Hub Islington, where I’m usually based, is the ‘original’ Hub in the network and is known for its coziness and tightly knitted community. Islington has remained small over the years, with 170 members and a team of 6 staff, with a strong focus on community building. So Zurich was a real adventure for me – over 900 members across four locations and a team of 60+ employees (!) I worried that it would take me ages to remember anyone’s name…

Looking back, it has been an incredibly insightful two months, and I am really grateful to all the lovely people who made me feel so welcome! Key things I have learnt:

Isabel: Zurich to London and back

My ‘home’ Hub in Zürich has doubled in size within the last two years, prompting some rethinking of our approach to community building. Impact Hub Islington looks back on over 10 years of community building experience – what a learning opportunity! It was a very special feeling to come to the place where it all began, and I definitely found the inspiration I was hoping for. Here are two things that will stay with me:

This was an experiment in inter-organisational learning that we can wholeheartedly recommend to anyone interested in gaining a new perspective on their work. We are developing a handbook based on this experience to share with Impact Hubs around the world as well as any other organisations interested in doing something similar (if you’d like to receive a copy email julia.oertli@impacthub.net). We both came back refreshed, inspired and with renewed commitment to our work in our ‘home’ Hubs.

We’d like to thank Stiftung Mercator Schweiz and their Expeditions Programme team for their generous support that enabled this exchange to happen, and our teams who welcomed a new colleague with such open arms.

Isabel is a trained work and organizational psychologist. Her joy of learning and her curiosity took her to different places and challenges. It has, amongst others, led her to do research...